Every year in Duluth the city creates a lighting spectacle in Bayfront Park on the harbor.  Bentleyville draws thousands of visitors from all over to witness this event and it was recently featured on The Great Christmas Light Fight!
The December full moon was on the 11th and I hoped to capture an image of the moon, Bentleyville and the Duluth Aerial Lift Bridge.  After first using Photopills to scout possible vantage points to shoot from, I settled on a spot along the Superior Hiking Trail that offered a view of all three.  I went out earlier in the day to inspect the site, felt it would work well.  In the light, it seemed like it had everything I was looking for.

However, come night, it did not live up to my expectations.  It had too much foreground, the moon was higher than I had hoped for and overall, seemed to be lacking something. 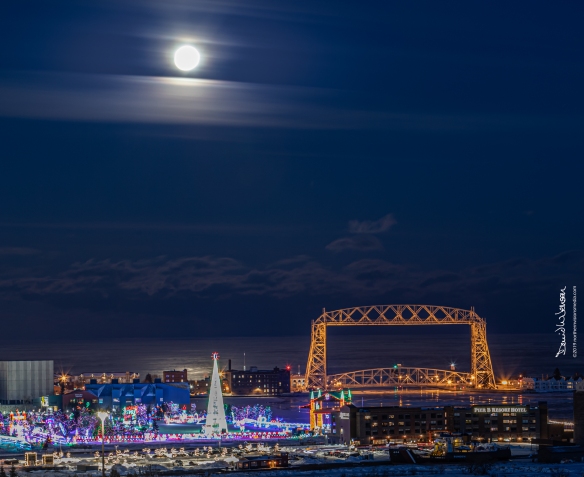 Sadly, the weather the next day would be snowy and cloudy so no re-shoot was possible.  I did take one of the images and crop to a panorama that, again, not great, but fun and colorful to look at.

The Glensheen Mansion in Duluth hosted another event for photographers the other day to allow access to the colorful lights on the grounds.  Some of the lights had been acquired from a local resident that could no longer continue the tradition of decorating her backyard on the shore of Lake Superior.  It has made a nice addition to the festive feel at the mansion.

Aimless, no destination in mind, a path to follow, mysteries in nature.

Today is Black Friday and once again I have chosen to #OptOutside.  Minnesota State parks were open to the public with free admission today and I visited Jay Cooke State Park.  It looks like I wasn’t the only one making tracks to the outdoors. 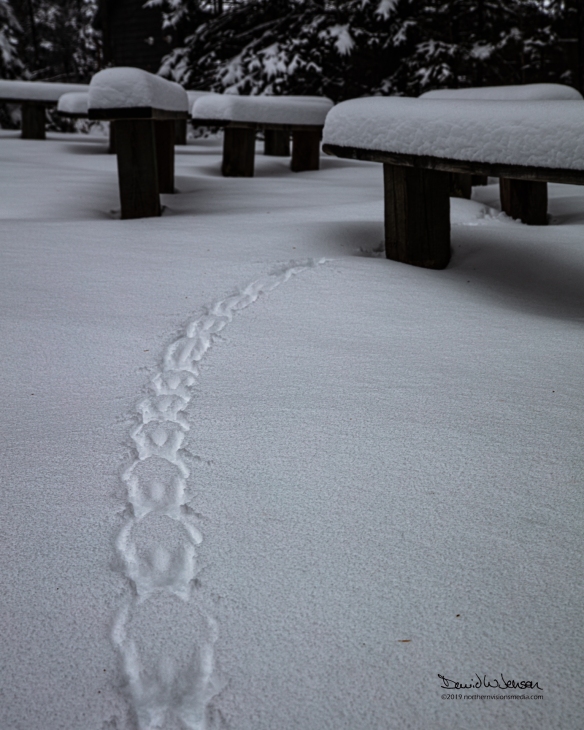 Over there, off to one side, another tree.  Two trees, each watching the other, keeping the other company.  One obviously older, having seen more, able to share with the other knowledge of the past.  They both watch, as the man on the side of the road takes pictures before vanishing down the October Road.

This one tree, standing alone, bare, receiving the morning sun on it’s bark and branches.  It catches the eye of a passing motorist who stops his journey on the October Road and captures a moment.

There, beyond the crystal-like barrier, lies another reality.  A place of pine forests and broad leaf trees.  A place where one can walk on solid ground without fear of slipping silently in to the dark water.  Make it to the trees, there lies safety along the October Road.

Shapes rise from the watery bog.  There is light and there is movement.  Who knows what lies beneath the water, beneath the light, what is hiding, waiting to surprise us?  These are the big questions along the October road.

It often happens that an idea does not become what one wishes.  The execution in the moment seemed like it would work. But the realization when editing is that not much can be recovered from the available information.  So, what to do?  I’m not one to just give up and walk away.  I will take  time and play with sliders and curves to see what I might create from the data.  The October Road yields an interesting possibility.